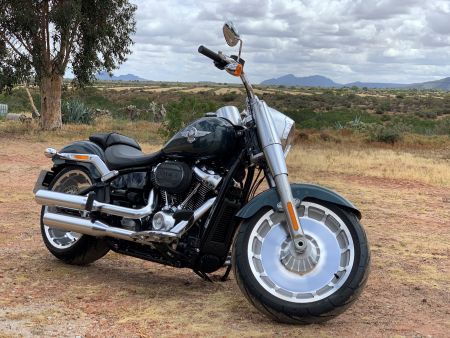 The Adventures of a Fat Boy® and a Nervous Girl

Now don’t get me wrong, I was only nervous leading up to my first ride on the Fat Boy®, not so much during the first soul-awakening kilometers together. Amidst the warnings around the difficulty of cornering with the 240mm rear tyre and the power of the Milwaukee-Eight® engine, I felt a certain trepidation, a respect if you will. This icon has been such an integral part of the H-D® family for almost 30 years.

The Fat Boy® saw fame with roles in movies such as Terminator, Wild Hogs and even the series Sons of Anarchy. It’s fame only rivaled by that of top Hollywood stars. Ask most adults who were young and impressionable in the Terminator era and they will tell you that they dreamed of one day riding this legend, wind blowing in their faces, fists to the wind and that unmistakable Harley® growl under their seat.

While I’m only slightly older than the Fat Boy®, I can definitely say that it has aged well. There have been quite a few tweaks over the years with the most recent being the weight loss (a 29-pound lighter frame), solid disk wheels and a 107 or 114ci Milwaukee-Eight® engine added for that extra knuckle-whitening twist of the throttle.

Shortly before the West Coast Rally in October, I received an email from my general manager, Kallie, to say that I would be riding the new 2020 Fat Boy® in for the demo fleet for my trip up to the rally in Lambert’s Bay. I was SO EXCITED! It was the only Softail® that I hadn’t taken for a spin yet.

First off, let me say: I was shocked at how light the bike feels when lifting it off it’s side stand. It is so well balanced too. This motorcycle is ready to go at the first sign of opening that throttle. With floor boards instead of foot pegs, the Fat Boy® caters for comfort and not just power. If you’re not put off by scraping those glorious floor boards, then cornering is not too difficult. It’s just about being aware that you need to pull the bike down a bit when it’s a sharpish turn. That being said, I don’t race through my corners – I’m a “smell the flowers” type of gal.

Besides the fact that being a woman on a Harley® can tend to draw glances, stopping at red lights on this beast drew outright stares. The all-new “Spruce” colour enhances the copious chrome accents of the bike and reflects the sky like an icy lake in mid-winter. I even got a high-five from a petrol attendant!

Needless to say, the Fat Boy® and the (no longer nervous) girl devoured the miles to and from Lambert’s Bay in happy synchronicity.

Would I cheat on my beloved Fat Bob® with the Fat Boy®? Any day of the week!